for my colleagues & comrades of Writers Forum Workshop – New Series, who have tasted what this recipe produces, monthly at The Fox, underneath the maroon lincrusta

And why do I do this, then?
well, if I didn’t, it wouldn’t be
so
dumb necessity claims – it’s like the experimental
– thank you Andrew Duncan
and was that Ian Brinton?1
because this means not mastery but learning
not predicting how the words will fall upon the page
letting what is in & beyond them speak through
and it’s like too avoiding writing The Poem – bless it!
all proper a
golden little bowl
but letting in the dirty cracks of human experience now
which I don’t understand2
try and live within
involving them in this writing as I also
seek its origins to escape – we must know
first what has been paid for all our poetry
as here in Stortford, birthplace of Rhodes3
but what did you expect then? – fucking holy innocence?
my arse!
welcome everyone
to the here-and-now4

So you need just to start, yeah
unfolding stories in wonder, picking
at scars5, at dreams, all
seeming discarded, itchy & painful
forms the apprehension to proceed

One touch over all you’ll need
improvisation to rearrange everything
as it comes at you to pick it up
place it as it says where it says
so it says aloud its name thus:
the dogshead of rage arises
ends up all decollated upon the pole
where Stafford & Warwick fight
& you try to get that energy
not to fit it into the schedule
but continually grow what you’re doing
until it becomes the place you are travelling to

The delicious game is to do this
with ingredients fresh & of the best
ones that fly around your head
untrammelled & unplanned but direct
open to all the stinking country-rock
yes, of ambient experience
thus:
reading & thinking thru the reading & writing of the poems of yr contemporaries
the last moment before the baby wakes & you’ve got then to attend
all the texts you have already written
all the texts you’d wished you’d written
the facts & legends of a family’s living
all the benefits you can gather from the company of poets
just what you encounter on the train to a rundown seaside town
the geography of that town, suffused with external memories
taking a postcard & ask who is it? who is it? where is it & why?
adding nothing
what you hear in a coffeebar, or a pub, or wherever – let it force itself in
the refusal to do what you ought – very important
using all those precise techniques for the making & raising of actual things
invent! with fortitude, the basis for all magic working & of all good cooking
the cultivation of your non-neurotypical self
high-status elites – focused on closely & continually6
openness to games, swimming, floating away
all your friends (real & imaginary)7
the weather
never forget a touch (or more) from Dom Sylvester Houédard
just playing about with your computer8
any system of magic that seems to work for you9
an attempt at out-foxing Vanessa Place10
fucking fucking rage
the pleasures of narrative
what appears to you in the night
scars
entoptic patterns
Walter Benjamin – read what you like11
itself – turned in & turned out12
& use of these what you want & in what order
or none at all & add whatever you wish
that’s pleasurable, nourishing & good fun together

Now, if a thing ain’t coming
– create its preconditions
then there’s no backward, let it stop with us
& inhabit too this vagrant sanctuary
– do this
– or however you like for all I care
the number of ways of acting is infinite
but
this here you can see13 is operative now:
write 10 poems sequentially
each following a different pattern
then numbered 1 to 10
decide by dice roll the order of forms
that you’ll use in the next run of 10
(purely as permutation – never 2 of the same successive
really doesn’t work!14
& with one of them changed to a fresh recipe
which determined of course stochastically
while binding across these strutting runs
let each poem bequeath 1 or 2 chosen words of power
to its successor 10 units on
& so on, building up as they proceed
– this has very interesting effects
+ 2 further turns
– whatever ingredients you choose of course
crucial is openness to all language & image
as you find them swimming thru this world
supersaturated with meaning as it is
let it crystallise out as it chooses
– & challenge yourself in your making of instructions
to go beyond what you think as poems
or what you feel at ease doing
in the mood of exploring & improvisational discovery
not as aspirant formalist – no!15
then let it play out
the great game
of writing a poem
put into this world
letting it swim with
in the motion of us

And the varied fortunes wandering through this poem
could not help me stop from saying what
there is in a poetic sequence:
as a journey
across this dark & obscure terrestrial star
not mere jumping on the spot
squeaking in the lyric voice
but major working
encouraging intervention
whatever speaks
Enochian tongues

Questions of lexis here important
avoid ritual purity like the plague it is
write for voice but not as voice
massed choirs or other transitory auditions
root in written words, sober as rain
colourful & nourished, yes, from the speech
of our Polish mothers
now too our source
but not our only
also words diurnal & strangely secular
as many out of the dictionary as in
syntax fluidic necessarily as current speech
occasionally conceptually fully logged
but flying, not wading or marching
write too as a bastard or a mongrel
hybrid vigour trumping formal rigour16

[So I got this out of many sources: Williams’ & Eliot’s complex sequences18; Spicer’s serial poem; heavy flavourings of Oulipo, NY, & early Cambridge too, my masters19; undigested (or overdigested) fragments from the forgotten avant‑gardes & alternatives of the late mid last century20. Slowly finally working through; what can I say? Find your own route, your own diet, your own recipe. Ignore mine. More from both art song & popular song good – structure, progression & repetition, variation & tone – try these & play. Freely improvise. Never mind it’s autumn here. We will reach whatever end we reach.21]

6 can only be critically

7 you’ve already begun to deal with our enemies

8 or your pen, whatever

9 well, OK, even critical theory; but when doing this working remember to protect your skull & its crowning chakra in a foil cap, & to rigorously avoid impure thoughts (< sigh! > even though these are the best)

10 Bert Brecht may be useful here, the cunningest old fox in such games – also genre prose, the more bastardised the better of course

11 then maybe some Brecht, yes, again; some Gershom Scholem – only then a little Adorno, once you have an educated taste

12 ideally both at once; or, just mistakes

14 think of this as good pragmatic advice, like the incest taboo

15 nor card-carrying oulipist – fellow-travellers only please

16 “Thus from a Mixture of all Kinds began / That Het’rogeneous Thing, an Englishman.” Daniel Defoe, “The True-Born Englishman”, in edited Geoffrey Grigson, Before the Romantics: An anthology of the Enlightenment (Routledge, 1946), p 137

17 yes, do bring in sound poetry & visual poetry or even asemic poetry – all good things; but never accept any restriction – seize opportunity always

18 let’s claim them both as the good English poets they aren’t, but could have been

19 also before them, in my innocence, the Beats – oh, the filthy grebos, don’t let those smart college boys sneer (or they’ll clock them snobby gits alright) – they’re the ones who really set it all in motion

We & I – let’s swim into this house
and have a bath, swiftly
everything spills, every one
embrace this feast
– we feed
each other’s faces
all summer long
delicious too
our ecosystem

Make a ritual of this now
The shock of utter events
Will break our silence
Hour by hour
– rearrange all this
thus:

Here is where we are all right
in unbroken being, yes, constant improvisation
always swimming into this world; slavery?
yes – but I cannot say, maybe we hide
the blame, the bodies, our bodies then
the wonder of it all in summer sparkles
& we are stripped of circumstances and weeds
we shall be rejoicing & thrive – thrust
to accept the delicious ecosystems of each other

of a sudden sooty, then within reverie
a question: Richard & Rita, Gilda, Glenn
Adrian & Stella – half-derelict all yet immortal
trapped that is in suffering & incompleteness
no help; congeries of shingle infest the shrine
just a Kentish artefact, briefly roseate
nothing whole; futile to improvise calm this dawn
La Vedette Atomique, my friend within the ale-house
out here the apocalypse is breaking into vapour now 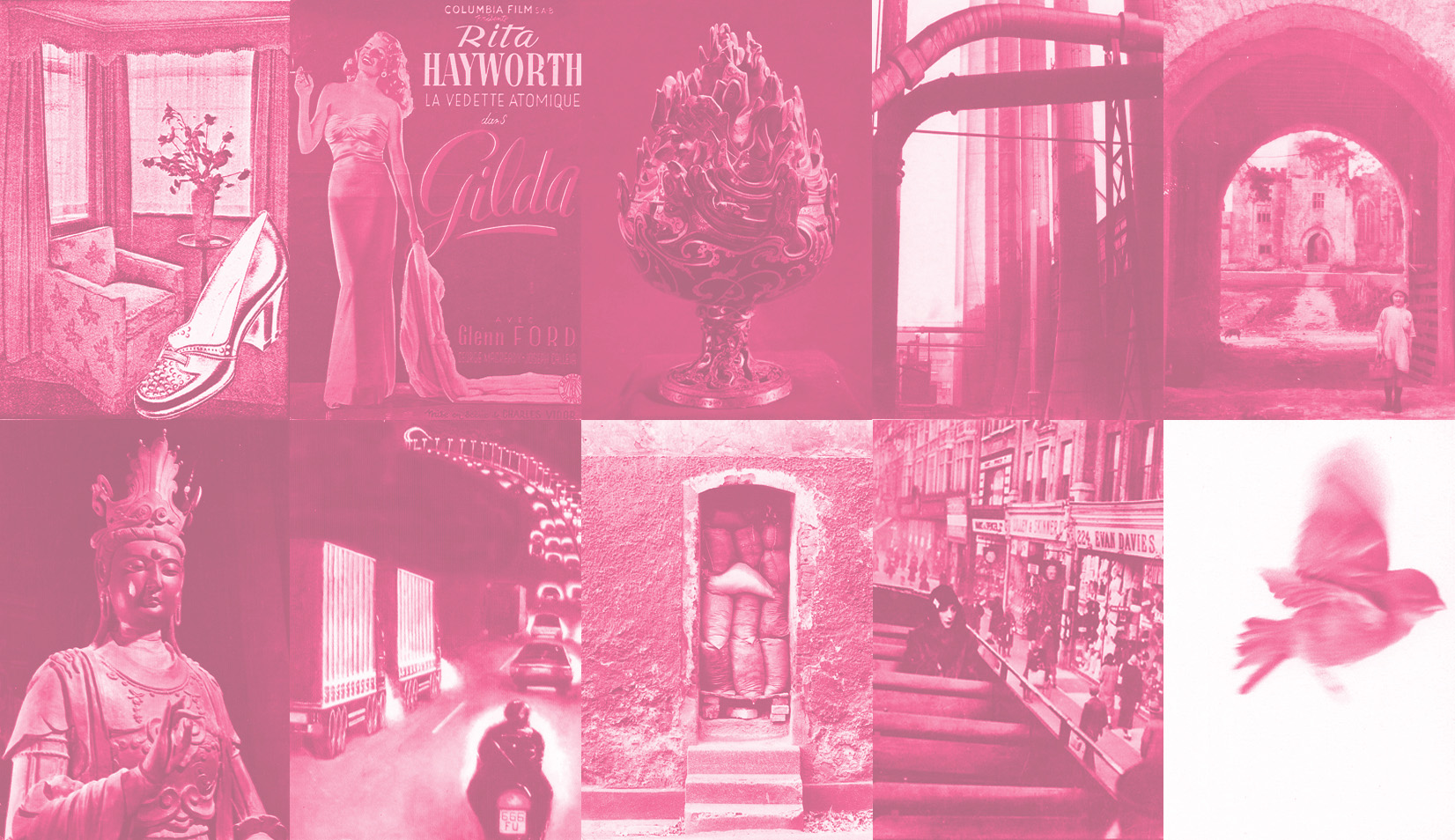 This is a very English dawn all right, roseate & sooty both. Your shrine is drowned, half-derelict, a Kentish ale-house within the ruins of vast and futile literatures. You are a beloved artefact of language & incompleteness we improvise in wonder – yet always the same.

Help me here, sudden shoe of our delight – “Can we get out of this room we all live in?” Gilda says no, for we aim to destroy ourselves within our generation. Yet she lives – blameless now & polished as this whole smoking world – aren’t we all like just ephemeral congeries of vapour, trapped briefly within the vast edifices built around us? Here planets burn entire. Time to reclaim their ruins. The vermin that infest, our hope at last, small timid girl, come join us sudden.

Help us, Kwan-Yin. No junk here of virgin birth, immortal suffering – the calm of identity as freely chosen self-directed loss. Help me then, friend Adrian. The night is black, the traffic slow, the apocalypse still stuttering forever in the eternal present. Help me, friend Richard, I can’t get out. I can’t get in. The words are all sand & shingle here. Help me, woman on a bus, lost in time & reverie – about to tip & fly. Oh to love that! And fly off into the dawn, dirty pink breaking into calm blank nothing.