• What I mean now Polly is I don’t know: all this elaboration, all this language – the fragile ice above the vast black lake of what there is. The pressure & the cold & the total lack of light within the depths – abased is one thing, abyssal all the rest.1

• Don’t you know this? Can’t you say this too? This language also fully integral to the deep dark, stained w/ centuries of bloodshed & contempt. But you know that already don’t you Polly – at one point there must be an acceptance of the wicked old, broken old world we live in, & then next up we embrace its sheer fucking heterogeneity, all the sloppy mixed up mess pullulating like flies in shit – oh how beautiful their metallic green sheen. How lovable.2

• the debris of all
– spread about
ripples of occurrence

• Oh come on please Polly. I know – “man”! – still must be nearer than turtle. Yes cladistic thinking is pretty primitive – the one thing we know about actual information is that it won’t be binary. It’s just more easily faked that way. This language just bends to ideology & oppression. We hear this we agree, let’s concentrate on where what face is speaking is building power, rather than fading & farcical. If you’re not a turtle you must be more man, even in that smoke-stained fly-green dress of yours.3

• And everything else here that’s raised is just figures or possibilities. Their number is unfinished as that of flies, breeding as we count them, as people as we count ourselves, as gods, uncountable as all our words. Dispossessed & homeless migrants, each equally remarkable. Let’s just forget what we’re called or numbered & concentrate on what we are.4

• I’m not saying it’s you Polly, except when you stand before me as I see & hear your voice.5

• Nor the Veer Book Collective. For a bunch of guys they’re not bad really you must agree. Good work has been done etc. Let them do as they wish – it’ll all be good.6

• I’m not sure to be honest where we’ve got with all this Broadstairs stuff. Something like – here’s where Procopius’s dead would arrive, at the little harbour (more suitable than the quayside at Barnstaple), and then ascending the road, left along Albion St (what else would it be called?) & then turn in at what is now the Chapel Bar, formerly a bookshop, anciently a shrine, still with its gothic windows & the bulk of its stock available. There we are you can go & do it. This is a poem about actual things.7

• And finally we can all go to Turbamento III in the basement of the Betsey Trotwood in Farringdon, October 12. See you there Polly. Let’s sing the praise of Eddie Bolger, Evi Heinz, Dave Miller, Will Stuart & Paul Ingram. Don’t you just love the inrush of fresh new things?8

that’s all the need
this poetry
here9

1 “And what do you know of being abased – you & your scary dark lakes?”

2 “Ah, acceptance. There are times I’m glad I played with Big Ted when I was a wee girl.”

3 “Oh, jesus fucking christ! Fading & farcical is the father-right, he says, spreading his chlamydiac thoughts around like a load of old spunk.”

4 “And what the fuck are you then? Bloody nameless & probably innumerate to boot.”

7 “Actual things! Anything that bolsters your own bloody fantasies, you mean. You’ll turn up now, turn hard right & vote for Farage, won’t you?”

8 And you never went, did you? Chickened out of any actual contact with anyone actually doing any actual new things. Oh well done, mister.”

9 “And just so’s you know – I’m taking over these footnotes from now on, from that Nearly Dead White Male who’s been spouting all this rubbish up above, like the last of The Old Gen Poets. He’s not even been counted in Steve Fowler’s Second Hundred Best Poets, has he?

“And I’m called Sarah Twomey today, as it happens. So I’d be grateful if you’d take some little awareness of that as well.” 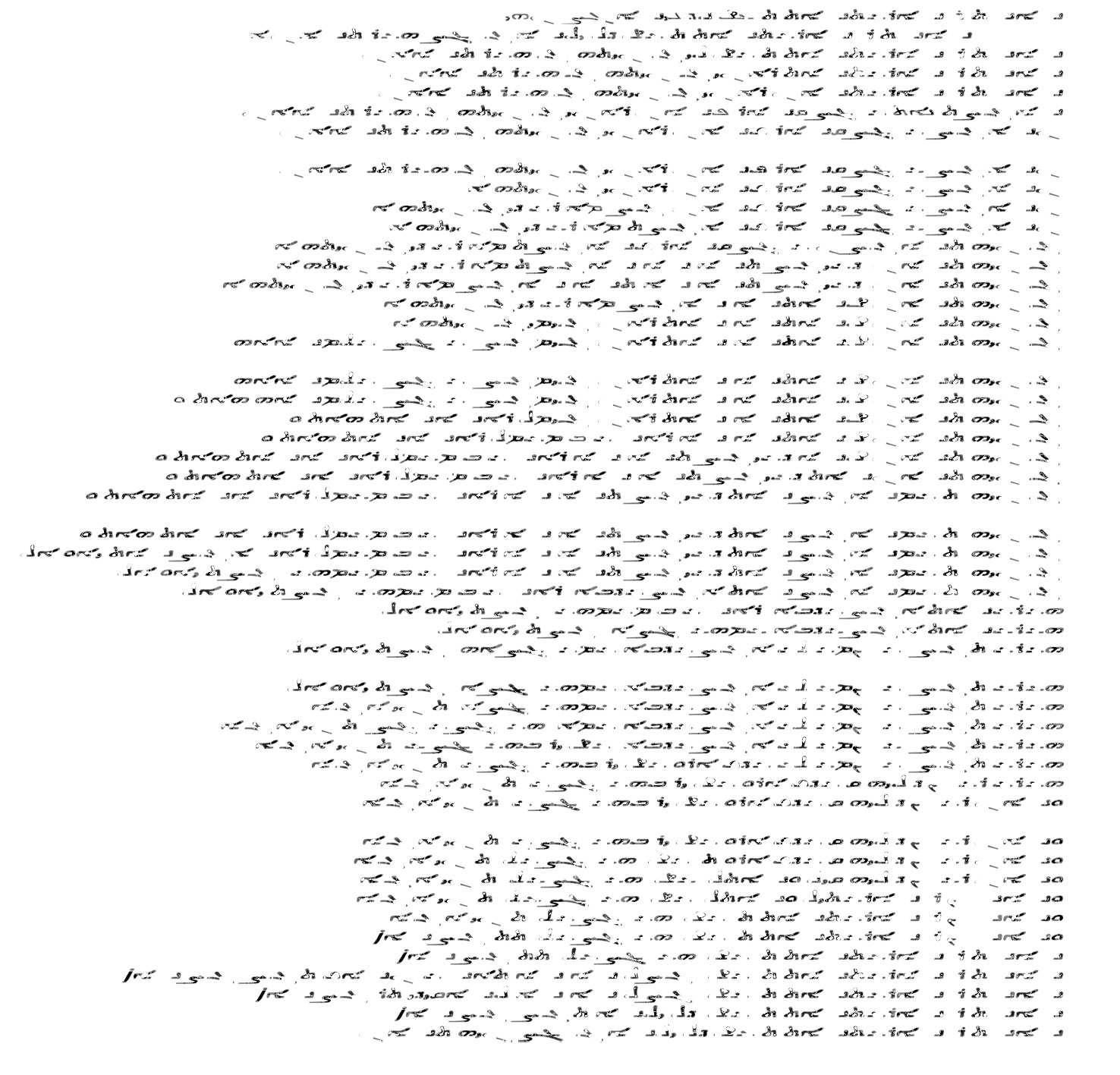 Nothing solid left to return to – that could be a relief. Everything that has happened is irreversible: it’s to do with entropy, rather than iussive poesis. Maybe the triumph of the bourgeoisie, turning out to be the zombie slaves of our new aristocracy (recte: kleptocracy). It is a return, but to nowhere. Think of it as being in hell forever.

Another thingy ran no process on. And what thingy was that? An improvisation of sorts. It can’t work any simple change: it wants the wonder of utter novelty, where something enters from the outside that isn’t there (they tell us). It is gross, disturbing, static in terms of here – in terms of there, a light, casual, generative verb: oh, to tapir, to gryphon, to bleeding head of a dog on a stick, to bird fly out & off at dawn, this dawn, the one that is now. An utter affront to the cryptic smear of events.

A homeless migrant out of nothing is all we are. There are no rights – only the duty of collaborative action to build ourselves a new home, preferably eternal. We’ve landed here, pushed off the boat, & struggled up through the mud & debris of this beach. The first thing we must do is hold a carnival on the quayside to celebrate we are here. Ignore the rain – rather, enjoy how our lights sparkle & waver. Such now is living.

What natural membranes outside to something? Think of sticky interfaces rubbing against your cheeks. It’s at the breaks & cracks, the splits & mirrorings, that something happens. Involutions of boundary layers establish new dimensions, new modes of being. These events form & multiply – OK? We are penetrated utterly through nothingness. What’s here, not here – what isn’t here haunting us & surrounds us. Time to dance thru the wet streets, each single one.

Always the same abased elements here – we don’t care. All our ideals are based on elaborate fakery – hunh? You want divine revelation? Only human, only ever human. Making it up as we go along – tauromachy upon the strand, incantations in the chambers, prayers & ale within the chapel. Bread of heaven, and the people’s beer. These the only materials we’ve got, here in Albion Street: up through the strait gate, turn left.

Again these brief warped children now. Who will they grow up into? Us, us and you. If you’re resigned to this – OK. Let it all breathe as the wind changes & we accept. A friendly cloud blots out the cruel sun. The children still play their violent games. Whoever survives shall be king; but the slaughterer will be the one remembered. It’s hard work, building a civilisation upon this brutish shore. The record is mainly one of massacres & betrayal: all the old giants, ones who’d helped us, put to death. Very well. Here we are. It’s never the right time or place or language. It’s what it is: one actual moment.

1 Out of the most vulgar of Old Sogdian, I’m afraid, and a very free rendering indeed. Translations do vary widely, especially as the MS is extremely worn & well-rubbed. There is a major alternative reading following.

oh – all these memories then
pretty sloppy if you want what happened
they catch the shine, that’s all
nothing solid left to return to

elastic in what? – I’d say warped & rotten
woven up wretchedly on the cheapest of looms
let’s start up again w/ Harlow & fun
gangs of noisy actual children – agreed upon this

Not ordinary on the quayside
mongrels move across (we are they
of gryphons & tapirs & people &
all free creatures – not marred
we choose carnival & laughter
night-time suddenly sparks and shines
the dust smells of meadowsweet
we are fierce, miswritten humans
now opening history to the full at midnight

not triumphal – heavy struggle
we are devoured within
a buffet of profound perversity
irrationality of the non-human
always back in the old mud again
something brutish & smearing
home is the horizon – it glitters
somehow we are still wading up the beach
trust, intensified, one of our great truths